When you book with an account, you will be able to track your payment status, track the confirmation and you can also rate the tour after you finished the tour.
Sign Up
494

Why Book With Us?

Do not hesitage to give us a call. We are an expert team and we are happy to talk to you.

Fes has been the oldest city in Morocco back dates to the 12th century. Namely, the name of Fez means an ax made of silver and gold that was found in the area. Furthermore, Fes known destination for all scientists and poets over the world. Plus, it contains the oldest school in the world.That’s why it’s the spiritual and glorious city of Morocco.

The first part of Fez tour will be outside the Medina, includes:

►The Royal Palace gate in Fes, the oldest & largest palace Gates of the King (14th Century) made by marble copper and Mosaic.

►Stop to capture memorable photos at Jewish Quarter (built in 1438) located near Royal residencies which enabled its inhabitants to be protected from the wrath of the Muslim populace.The Mellah in Fes was once only inhabited by Jews. This was the first “Mallah” in Morocco.

►Ceramic school: known for its handmade pottery. You will have the chance to discover amazing products and see local artisans.

►Madersa Bou Inania: Established by Abu Inan Fais ( in AD 1351–56), who established the Madrasa Bou Inania in Meknes city too. Its wide acknowledged as a significant example of Marinid architecture. In addition to, its role as an institution for the education establishment of scholars. It has a stunning silo construction, decoration and a water clock technique operated unknown.

►Tannery or Chowara: the oldest and the biggest fascinating tannery in Africa.In order to see the spacious array of leather and workers who use only natural colors to produce leather with a high-quality

►Nejjarine, the museum of wooden crafts. housed in an 18th-century funduq.It is one of the main places for merchants to restored their goods, everything is beautifully presented and varied from musical instruments, Berber locks, prayer beads to the huge courtyard in the middle of the museum.Definitely, enjoy your time and your senses will be captured by how amazing looks like.

►Kairouine University, one of the leading spiritual and educational centers of the Muslim world, In addition to, it considered the oldest continuously operating institution of higher learning in the world.(Founded in 859)

►Attarine Madrassa, known for its Arabic calligraphy in the entrance, and the beautiful fountain in the courtyard. Furthermore, the place is fully ornamented with marble and the Moroccan zellij. In addition to, the big wooden doors.

►Moulay Idriss mausoleum, A zaouia (shrine), the tomb of Moulay Idriss II, who ruled Morocco from 807 to 828 and founded Fez city for the second time in 810.

Finally, finish your cultural tour by visiting the local places of handicrafts, like, Saffarine which is a place specialized in making Cooper like glasses, trays…

16.00-17.00: At the end of Fez cultural tour, back to hotel/Riad in Fez. Morocco Fez tours will surprise you with other places and entertaining activity. For example, henna hands tattoos for free, just book your “Fes cultural tour”. 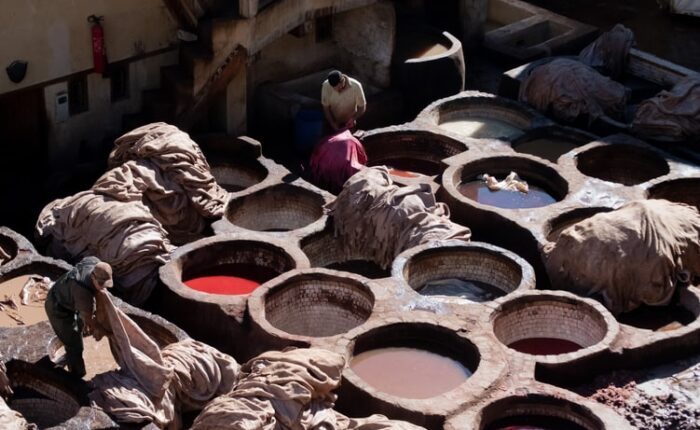