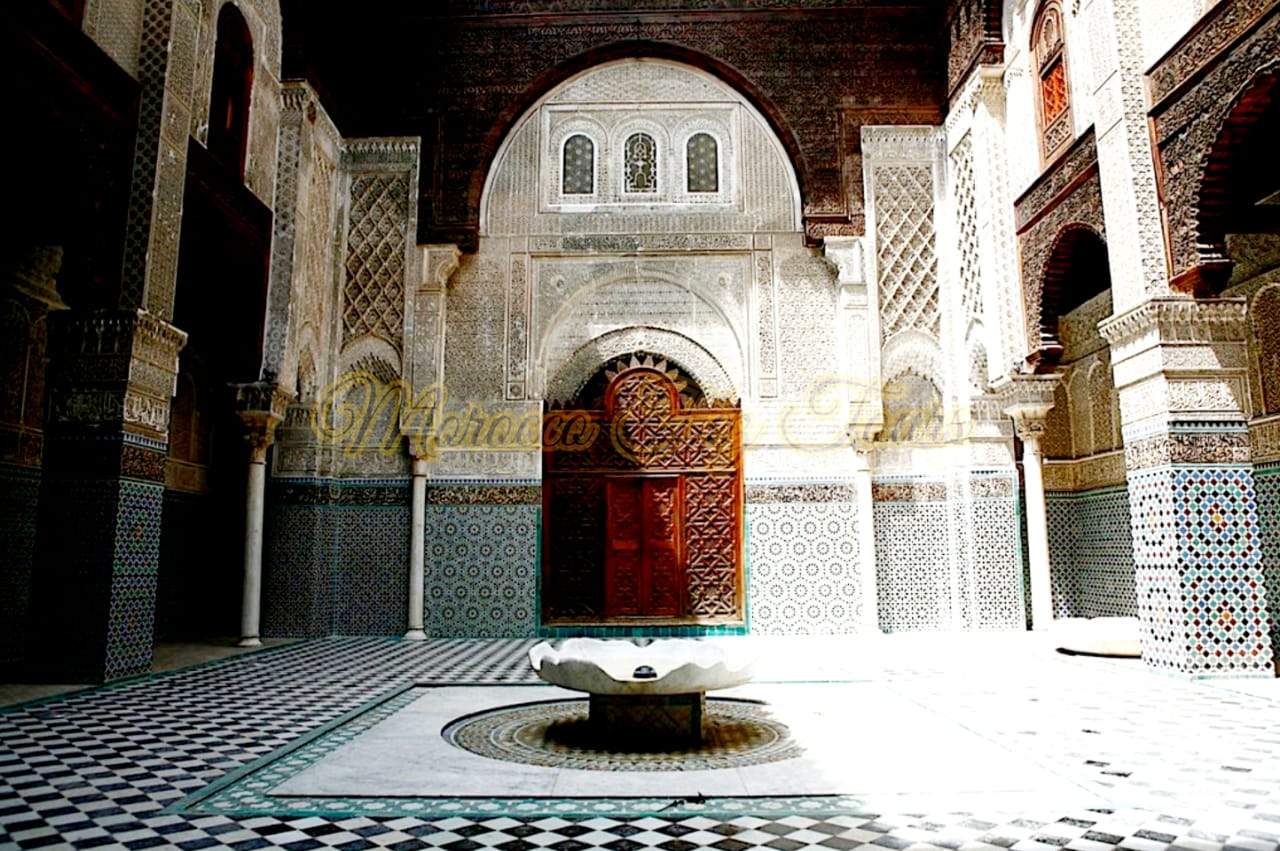 Fez is a city that worth visiting and exploring, this is why our Agency Morocco Fez Tours is pleased to introduce you to one of the oldest and well-known Schools in Fez: Al-Attarin School.

Al-Attarin School is located in the north of the Al-Qarawiyyin Mosque in Fez; it is one of the most beautiful ancient Moroccan schools, despite its small size, due to the exquisite decorations that make it a rare architectural masterpiece. The Marinid Sultan Abu Said Othman ordered between 1323 and 1325 the construction of the Al-Attarin school, and several books mentioned that he personally supervised its establishment in the beginning.

Al-Attarin School consists of an open courtyard with a basin of water surrounded by a square prayer hall and halls designed to receive students and teachers.

The decoration of the walls surrounding the open courtyard summarizes all the techniques adopted by Moroccan artists in decorating their monuments, and they also showed great ingenuity in dealing with various materials, the most important of which are cedarwood, stone, and ceramic mosaics known as “Zellij”.

The School of Al-Attarin took its name from the place where it is, which is adjacent to it and is represented by The Souk of Al-Attarin (Al-Attarin market), which is considered one of the well-known spaces in the city, which are known to be annual tourist arrivals from inside and outside Morocco.

In the main entrance to Al-Attarin School, there are engraved inscriptions that impress the visitors, as the entrance door leads to a rectangular courtyard that contains three entrances, the eastern of which leads to the place of ablution, and the western one is connected via an ascending staircase to the students’ rooms, while the entrance located at the center of the courtyard leads to the rectangular school nave, whose longitudinal rib runs from north to south and is centered by a square, marble-shaped water fountain that gives the historical space more aesthetic.

On the other hand, The School of Al-Attarin maintains distinct columns with many pillars or inscriptions, including poetry and historical writings and Quranic verses, as well as giving aesthetic to it some very astonishing types of chandeliers.